Home Uncategorized The Palins Chose Life So Should Everyone Else 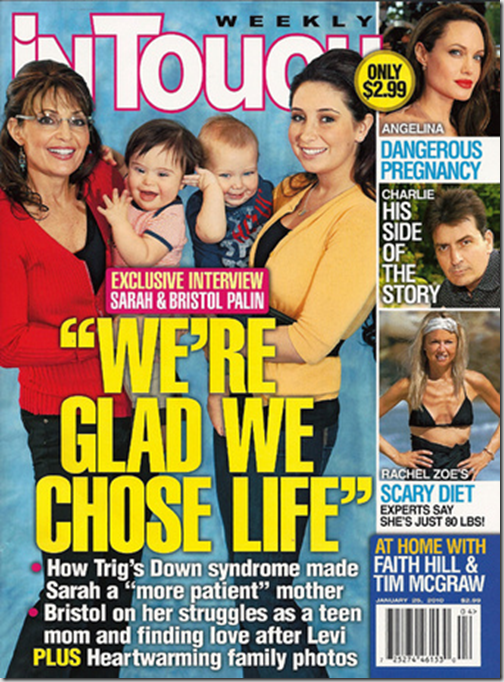 Okay, so the Palin ladies chose life.  Good for them, however I am tired of them using their decisions like a battering ram to shame women who decide for various reasons that motherhood is not for them.  I can give Bristol a little bit of leeway because she is clearly under her mother’s thumb but eventually my patience is going to run out.
What these women fail to recognize, is that when women choose abortion, they are also choosing life.  Women who make the painful decision to abort are doing so because making themselves a priority is important and it is something that we have been  taught to forgo from birth.  Let face facts shall we, ovaries and a functioning uterus do not make one a mother.  Perhaps if more people realized that they were incapable of dealing with the responsibility of raising children, there would not be so many of them abused and neglected.

The pro birth movement uses women like Sarah and Bristol to suggest that women who choose to abort are chronically depressed and living with shame.  Simply because they are happy in their decision, does not mean that women who choose not to become mothers are not happy in theirs.  Motherhood is not a biological imperative like breathing or eating, it is simply one option out of many that we may choose in our lifetime.

The other obvious elephant in the room that continually gets ignored is that they are both White women.  Can you point to one unwed teenage mother of colour that received the kind of redemptive treatment that Bristol Palin did?  If one of Obama’s daughters became pregnant from a man-child whose main goal was to get fifteen minutes of fame, it would be a hot second before the slut shaming began.   Not all mothers are treated equally and in fact more often than not, Black women are constructed as irresponsible breeders.

Sarah and Bristol also have access to resources that a poor mother could never possibly dream of.  When a woman was sterilized against her will, instead of focusing on the gross body violation, the common refrain was to support the doctor because very few felt that we are communally responsible for children.  This choose life mantra is nothing but a cover for a desire to control women’s bodies and subject us to poverty.  It is a known fact, that a mother living alone with a child is most likely  to be poor and this is even more true if she is a teenage mother, which Bristol Palin is.
Finally, in what is perhaps the most disgusting factor in the media presentation of Sarah Palin, is the way that Trigg is used.  Constructing her as a “super mom” because she decided to sacrifice and give birth to a child with Down syndrome is highly ableist.   Trigg is a little person and he has value simply because he exists and yet he is seen as some burden that the sainted Sarah took on.  Whether we choose to acknowledge it or not, his life will broaden hers.  His experiences will open doors to her that she may not otherwise have approached and this is the same with ALL mothers; it is not a unique phenomenon to mothers with Downs Syndrome babies.
In a society in which mothers are decidedly devalued, the way that the pro birth movement shames women and then fails to support the children that they argue that women must give birth to is disgusting.  From a lack of sex education, to purity balls, to the denial of abortion, which is a legitimate medical procedure, at every juncture they seek to deny agency.  Holding up women like Sarah and Bristol will not reduce the numbers of unwanted pregnancy or defeat child poverty but hey, we all benefit when White women smile pretty for the camera right?

Prop 8 Overturned and why Folk don’t give a fvck!