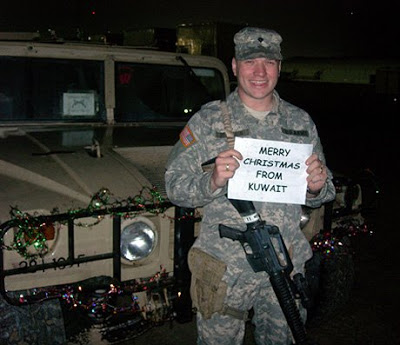 Every year at Christmas time, we see these commercials from military families, or servicemen overseas, wishing their families a Merry Christmas. Why Christmas? How come we don’t see them on TV when its…I dunno…Labor Day, or maybe…the 4th of July? Or worse yet, Memorial day?

Instead, they choose to do it at Christmas. You might say its the time of year for family, and that’s what its about, but I say bullshit. Yeah, yeah, yeah at Christmas people overlook the fact that cousin Frank molested 13yr old Sharon at the family reunion and all, because its about family.
Don’t you get the message by having these people on TV wishing their friends and family back home a Merry Christmas? They’re not spreading holiday cheer. They think they are, but its actually another gov’t propaganda public relations move. Lemme guess, the people here, back home, know exactly when their loved ones or friends are gonna be aired on TV right?! Yeah, they all know when, so that way they don’t miss the opportunity to see them. Yeah, that’s exactly how they put it all together. Here’s the truth: These commercials are designed to tug at your heart strings. You’re supposed to feel bad because these people are overseas away from their families and friends at Christmas time. Upon seeing this, you’re supposed to appreciate these “brave” men and women who serve this country, in making that sacrifice. Yup, you’re supposed to feel guilty for sitting your ass at home watching football, and eating ham and having a good time with your family, while these people are all in trenches being bombed by the enemy. Get the picture now? Now you understand why this happens? Its all marketing folks. Its just another commercial, or a tool to attack your mind.
“But these people sacrifice a lot for your freedom RiPPa”Bullshit! The men who fought the British and the men who fought in the civil war are the ones who sacrificed for my freedom. They’re all dead now, but those are the guys I see as making a sacrifice that benefits me and my family. I’m sorry but, I’m too smart to get sucked in by propoganda packaged as patriotism. But, there are millions of people who buy into the bullshit and thats why we have wars, or as they would like to call them “conflicts” overseas. They all do it to preserve my freedom? And you call it a sacrifice?
The fuckin military exists because of poor people! The majority of the people in the military are poor. The only “rich dude” that was in the military was Pat Tillman, and they killed his ass. That’s a person who sacrificed. The man was under a multi-million dollar contract to play in the NFL, but he walked away from that to serve his country in the fight against terrorism after 9/11. Then he gets killed in action and dubbed a HERO by the military, and everybody felt sorry for him and his family.
I thought that was pretty fuckin genius the way they did it. They used his death to touch the hearts and minds of millions of people. I’m pretty sure plenty people enlisted just based on his story and his death. But low and behold, they failed to mention that he died from FRIENDLY FIRE! They never even told his family that he died after being shot in the back by one of his fellow servicemen. They never told the truth because of the bigger picture. In case you don’t know what that is, its called marketing. How about this? How about we start putting convicted criminals on TV? Yeah, how about every year at Christmas time we see commercials from convicted criminals wishing their families a merry christmas. I mean, I’m sure they miss them too? But I’m sure that wouldn’t fly because, well, they’re criminals…
“They’re not heroes, they never did anything good to benefit me and my family! If anything, them being in prison makes me feel safer!”I say they might as well start having Bubba the axe murderer and the boys on TV from prison wishing their families a merry Christmas. Hell, just like the military, they’ve killed innocent people. Plus, them being where they are makes us feel safer. Ok, so people behind bars might be stretch. But can we at least get some Merry Christmas commercials from homeless people? I mean, if you’re gonna tug at my heart strings or remind me of what Christmas is about, seems like that would be the way to go. Now there’s an idea. Hell, you never know, maybe their relatives will get a chance to see them, claim them, and get them off the streets. After all, 250,000 of them are military veterans, and the gov’t isn’t doing much for them anyway.