First of all, E-Verify isn’t a “federal law,” as the turd in the video above says – it has yet to be federally mandated. As of right now employers have the option of using it or not to check the employment eligibility of potential and current workers, But more on that in a future post, so, so me a favor and ignore Bubba above who strikes me as yet another racist-freedom-loving Conservative…

Listen up white men; we gotta talk. OK, so I’ve been watching you guys for a while now, and quite frankly, you guys are scaring me right about now. Yes I know that recent trends have given rise to your feelings if irrelevance. Your kid loves rap music and wears his hat backwards, the president is Black, and you just found out that your 17-year0old daughter lost her virginity to some Mexican kid named Jesus. So yes, I do realize just how traumatic you existence has been lately. No seriously, after centuries of world domination this type of thing can lead to alcoholism, punching your white mail order Russian wives in the face for no reason other than thinking O.J. Simpson might have been innocent, and even suicide. Yes, I know it’s hard being a white man in America.

Of course the weak minded among you would be affected by all these changes this way. However, there’s no way you guys could have dominated the world for as long as you have by being weak. So what do you guys do with your new-found fetish for all things nostalgic outside of a ’37 Chevy? Well, of late I see you guys have focused on the obvious threat to your God-given right and entitlement that is American citizenship. That would be, women and immigrants. I mean nothing is more a threat than the thought of the current illegal immigrant explosion, and just how its miscegenation will undoubtedly lead to your near extinction. And of course we can’t have that; I mean, what would Hitler think. More importantly, what would your ancestors think of you?

So what do you guys do? You do as always; you come up with ways to systematically oppress both groups; and you do so after yet another round table white man discussion where you guys drink Pabst Blue Ribbon, or whatever beer you guys drink these days. You get fellow white men to pass some of the most racist laws in Georgia and Alabama that targets illegal immigrants with brown skin specifically. Yes, I seriously doubt whether anyone will be labeled a criminal if they knowingly transported an illegal immigrant who who happens to love Cheese Wiz as all white people do unlike people of color. Nor do I think a Landlord in Alabama would be worried about the Canadian white family who has overstayed the limit of their visas seeking housing.as a potential threat of arrest, should they rent property to them. But don’t tell that to Rush Limbaugh; yep, none of this is racist. Yep, there’s no racism or discrimination when it comes to the enforcement of laws in the United States.

You Know, sorta like the Supreme Court did this week?

And of course you white guys believe that a woman’s place is barefoot, pregnant, and in the kitchen. And this is why women don’t make as much as you guys do on the dollar. And this is why the white men on the Supreme Court – yes you’re white too Clarence Thomas – sided with Wal-Mart against a class action lawsuit for the unfair treatment of women. At Wal-Mart women make up 70% of all hourly employees, and only 30% of management; but sadly, even as cashiers they make less than men. They’re often encouraged by management to sign up for food stamps and other social services. And I suppose this is all due in large part to those female workers having the gall to ask for more than minimum wage. Or even the audacity to step into the white man’s world of employment, and make such foolish demands as equal pay for a days work. 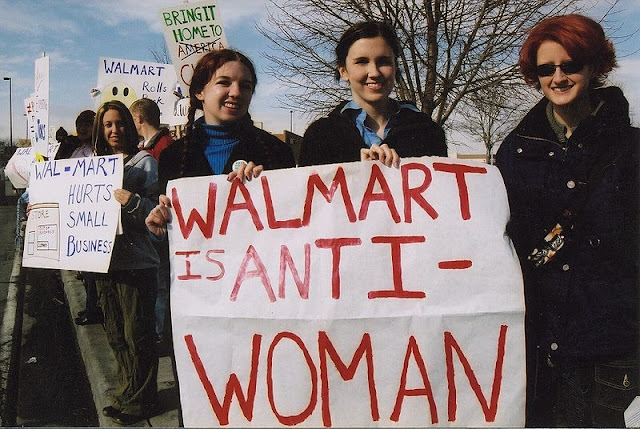 The Supreme Court’s decision regarding the gender discrimination class action lawsuit against Wal-Mart this week was abhorrent. But what do you expect when white men own corporation who in some strange way are able to influence elections and Supreme Court Justices like Clarence Thomas and Co.

The truth is, you white men can use some oppression in your lives. Because quite frankly, you guys have had it easy. I’m not sure of just how much oppression is enough oppression for you guys. But I’d say a few clubs to the head, and having water hoses blasting you while being bitten by racist German Shepherds might be enough. But then again, not having to live through the horror that was slavery, Jim Crow, and the Civil Rights movement because of your privilege, I’m afraid you guys will never get it; nor wake up to 2011.

So hey, you white guys and continue to refuse to play catch-up to the reality of our evolving diverse society if you like. Hell, since Wal-Mart is now allowed to continue treating its female employees unfairly per the Supreme Court. And since like the Neanderthals you white men are with this whole oppression, and white male dominance thing. I suppose you guys won’t be too upset if Wal-Mart fired all their female American-born employees and hired illegal immigrants in their place. After all, exploitation is exploitation, and of course this is the way of the white man, yes? I could be wrong, but I doubt it.

Guest Blogger: CARS RIDE BY WITH THE BOOMIN’ SYSTEM by Mason...