Home Uncategorized Bristol Is Taking Levi To Court For Child Support, Of Course This...

According to TMZ, Bristol’s lawyers filed paperwork last Thursday in an attempt to secure child support for her son, Tripp.
According to the docs, obtained by TMZ, Bristol believes Levi has pulled in “in excess of $105,000 in 2009 through various media interviews and modeling related activities.” The $105,000 figure is significant, because under Alaska law a non-custodial parent must pay 20% of income up to $105,000 a year — which comes to $1,750 a month.
Bristol says in her sworn statement, “I have received limited and sporadic financial assistance from Levi.” Bristol says Levi has forked over only $4,400 over the 13 months of Tripp’s life — $3,000 on September 9, 2009, $1,400 on December 19. 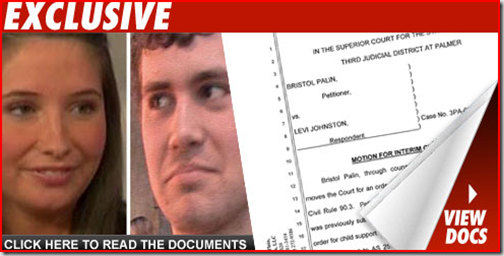 I decided to read the comment sections on both reddit and TMZ.  There were some that felt that Levi should live up to his parental obligations and then of course there were comments of this vein:
What a F up family………Maybe Grandmom Sarah needs to also make sure she helps since she is doing nothing for this country except selling books. She is as big of a loser as her daughter. She needs to stop spreading her legs, she and mom need to get a real life. WOW what a F up family all of them.
FOR 1 KID?R U Kidding me…I have 3 and I don’t spend that much on them and I am a housewife for 15yrs now! GET REAL GIRL…WAKE UP FROM THE DREAM YOU ARE LIVIN IN.
Geez – $4400 is much more than I’ve EVER heard of anyone getting from a 19 year old father, and she wants $1750 a month? Why should she get that much? Greedy bitch.
HE NEEDS A DNA TEST TO PROVE HE IS ACTUALLY THE FATHER.
ALONG WITH THAT COURT DOCUMENT, WHY IS THERE NOT A REQUEST FOR PATENITY?
JUST SAYING, HEARD SHE GOT AROUND THE FOOTBALL TEAM
this is crazy. she is not looking for child support she is looking for someone to support her. 1750/mth. is way too much her to get without working for it. she was not used to any kind of life with levi before this that would warrant a change in living standards if she didn’t get that much money.
She’s a money grubbing bitch, from everything I have seen Palins are all about money. Why do you think she quit? Because she can make more money with her stupid book and being governor of our awesome state was probably below.
She has tried to move the capital from Juneau to Wasilla so all their property values go up, that’s it.
How about Bristol pay Levi 20% of her earnings from the “US Weekly” and “Time Magazine” interviews she’s done, since they haven’t officially decided she gets sole custody anyhow.
She got pregnant. It’s her body. Where’s her responsibility? She mothered a child irresponsibly and all you can do is blame the man? And now she gets free human welfare every month?
More accurate headline: If you’re not old enough to vote, then you shouldn’t be responsible enough to take care of a child.
To take money from the male is getting fucking ancient. How about instead of single mothers living off of child support, before a woman gives birth, she should ask the husband if he wants to be apart of it… if he doesn’t, then the baby is all yours.
No child support. Equal rights? When and where, cocksuckers.
So if I had a vagina, I could just trap sperm and have someone pay for my college after I pop out another little nothing?

Is anyone banging their head against a wall yet?  One of the major goals of MRA’s is to abdicate the responsibility to financially support their children.  It is a well known fact that women make less than men and if a woman is living alone with a child, she is more likely to be living in poverty.  Their concern is not for the children that they had a part in producing, rather it is wallowing in their male privilege because of their decidedly misogynistic understanding of reproduction.
They use the argument regarding the autonomy of female bodies to suggest that they are being oppressed.  The fact of the matter is that at no point were they being forced to engage in behaviour against their will.  They could have chosen not to have sex and they could have chosen to wear a condom or have a vasectomy.   Throughout the entire process of reproduction, the male body is always in a position of authority and furthermore; their actions do not require a law to ensure that their rights are being protected.
It would seem to me, that Alaska’s twenty percent law is extremely fair.  A child may not cost the 1700 dollars a month that Bristol is requesting, however; a child should be able to to live within the same economic class as hir parents and this is something that the MRA have continually failed to acknowledge.  If a child is living at home with two parents, ze would have taken on their class status and receive any ensuing benefits.   Why should the father be able to live a life of extravagance with the child receiving no benefit?  It is a known fact, that the more money a child has to be raised on, the more opportunities that will be available to hir.
Finally, perhaps what is most disturbing is the idea that a mother who requests child support is just lazy and wants a free ride.  Even if the mother is not working outside of the home and is completely dependent upon support to raise a child, she is still working for the money.  Simply because parenting does not produce  a product that can be sold on the open market for a profit, does not mean that it is not work or that it does provide a measurable gain for society. Unfortunately, for far too many, mothering falls under labour that women are expected to provide for free because we are constructed as the nurturing sex.
Slut shaming Bristol or calling her a lazy bitch is simply reductive and serves the purpose of reducing Levi’s responsibility for their child.  Even though she is currently living with her parents, they are not responsible for raising or paying for that child.  They had no hand in the creation of the child and to suggest that they should pick up Levi’s slack is ridiculous.  They are already providing a home for this child, which is more than he is currently doing.    Paying twenty percent of his income will not impoverish him.  The idea that women should be solely responsible for the financial support of children has one purpose – impoverishment.

After the earthquake, Haiti needs more than your latte money