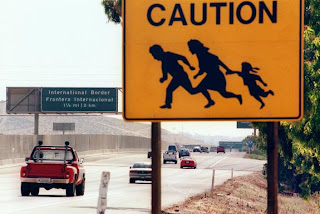 A new anti-immigrant bill (SB 1611), introduced  by the same man responsible for the infamous SB 1070, has been passed by a state appropriations committee in Arizona this morning. The bill now needs to go to the state House of Representatives and Senate before landing on the Governors desk. The bill is much more far reaching that SB 1070, and has human rights activists and health care professional contemplating civil disobedience.

The bills would deny birthright citizenship to the children of undocumented immigrants; make it a crime to drive without a license, punishable by 30 days in jail; ban undocumented students from accessing higher education; require proof of legal status to attend K-12 schools; and require hospitals to inquire about the immigration status of their patients.
There are also provisions that would increase penalties for government employees who fail to report undocumented immigrants to immigration authorities if they apply for public benefits. SOURCE

It is amazing that a country that is MADE UP ENTIRELY of immigrants is so bent on denying the rights of people who were born in other countries and have the NERVE to want to pursue a better future for themselves and their families!  If the people in Arizona want to pass punitive measures against so called “illegal” immigrants than they should address the original “invaders” the Europeans who flooded country after Columbus “discovered” this land in 1492. If law makers want to criminalize immigration than they should start by recognizing that all of America is stolen territory.

Whenever I have spoken to people about the issue of immigration, I have heard the same rhetoric over and over… that “illegal” immigrants are criminals simply for living in this country without proper documentation. The truth is, “illegal” immigration is a CIVIL offense, not a criminal one, but this Arizona law seems to want to change that.

Meetze said SB 1611 is more problematic because it would effectively create the crime of driving as an undocumented immigrant. Currently, Arizona doesn’t grant driver’s licenses to people who are in the country illegally.
“This will allow a police officer to detain somebody if he or she believes they are undocumented. Anyone (who) is perceived to be an immigrant is going to be stopped and questioned,” she said. SOURCE

It is extremely problematic that the state of Arizona wants to forbid immigrants without proper documentation to obtain needed medical services without disclosing their “illegal” status. This will inevitably result in an extremely dangerous situation, as immigrants will avoid seeking medical care for fear of being deported.

It is also unconscionable to allow the state to deny an education to a child based on immigration status. In fact, it has been outlawed by the Supreme Court, but that seems to mean nothing to lawmakers in Arizona.