Have you ever taken the time to listen to someone that absolutely makes no sense? These people may talk a good game. They are eloquent, verbally proficient, and even bring up talking points that sound good. Yet, all of their loquaciousness doesn’t add up with reality. It is as if they take a position on something and never completely seal the deal.

In many cases, these people tend to be delusional.

And that is what I have found within the video “White Privilege Doesn’t Exist” by Terry Swoope. This clean cut gentleman seems to have his head on straight. Still, the premise of his argument is solely based on one singular idea: privilege is based on money and wealth and not skin color. And he takes a nice amount of time (seven minutes and thirty one seconds) to hammer his point down. In the end, he wasted at least six minutes of this video because his thoughts don’t fully match the reality that exists.

As soon as he starts off the video with “Privilege is based on money. It’s not based on race,” I knew I was in for a long video. And Terry Swoope did not disappoint in any way. His entire idea is based on acknowledging that there are (just as many) poor white people in existence to contrast the Black people. He also feels that the idea of white privilege is a sign of a self-inflicted inferiority complex. All in all, Swoope feels that white privilege is just another excuse for Black people to be lazy and blame White people for all the ills in their lives.

The biggest problem with this video is that Swoope has no idea how privilege works. You see, privilege is a special right or advantage granted to a particular person or group. What privilege does is allow people to have some advantages in situations that others may not. What it typically won’t do is eliminate and eradicate ALL situational circumstances. This is something called intersectionality coming into play. White privilege tends to intersect with classism, sexism, racism, and all the other isms that cause issues. Even still, I would hope that Swoope would have a better understanding of the fundamentals behind being privileged. 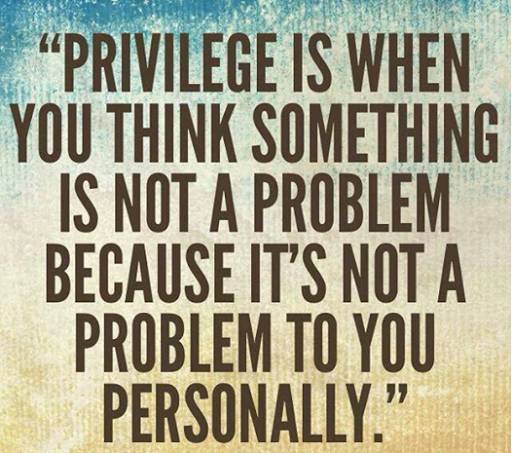 Then again, I can’t be shocked because his opinion was extremely limited into pinpointing one or two causes for privilege: money and wealth. And therein lies the problem: many of the systems that hold (Black) people back aren’t always caused/influenced by money. Many of the privileges that exist are systems people are born into anyway. And being born into a situation can cause much ignorance to the existence of the privilege. Money and wealth does make life easier, but it will never fully eliminate situations of privilege.

Let me give an example situation for people to think about:

Think about a person that was born crippled, African American, and female. Oh, and she is also a lesbian. This person now has four things working against her: race, sexual preference, gender, and ability. This does not mean that she won’t achieve. Also, she could have money (which can help with some of those lack of privileges).

However, there are situations that she will have to deal with because of “who she is”. There are going to be issues with her because of her being Black in America. Also, there are those that will hate her because she is a lesbian. Since she isn’t able bodied, she will always have to deal with needing someone’s assistance. On top of it all, she is a woman and women are consistently mistreated within this “great” nation of ours.

And that, my good people, is how privilege works.

End The Delusion About Privilege

Privileges exist for many of us. That is how life works. And just because people have issues doesn’t mean a certain type of privilege doesn’t exist. All it means is that the privilege that is possessed has limits. Thus, people like Terry Swoope and others that don’t believe in white privilege need to understand that their opinion has no bearing on what really exists.

Let me repeat: privilege exists for many people. Acknowledge it and act accordingly.