I got to the march late and missed the actual march. I was under the mistaken impression that there would be speakers and entertainment followed by the march, but it was the other way around.

The event was well-attended with my eyeball figure putting it at around 2-3,000 people. Men, women, transgender, straight, gay — everybody was in attendance. It was great to see the solidarity, the togetherness, and most of all, it was inspiring to see so many women, and those that love show up and be silent no more. Lots of survivors here and the event was both somber and entertaining and very humorous.

One speaker, a Latina, addressed the controversy surrounding the use of the word “slut” and she did a great job. The power to define words (and human beings), and the importance of challenging that power is what’s essential. What does it mean to be called a slut? Who gets to decide to label someone a slut? What happens to people who are marginalized as sluts? And as a Latina, she often gets labeled a slut simply because of her ethnicity and the color of her skin because, as we all know, Latinas are ‘hot blooded,” right? SMDH

Until we live in a society in which being called a slut is no longer a tool for oppression, we will not be free. 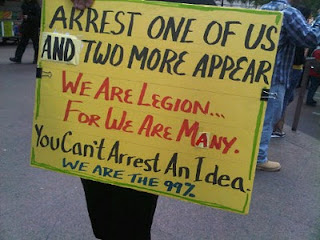 After enjoying a brunch with my friend, Puma, I decided since it was still early (and raining), I would take in a movie and then head downtown to the Occupy Wall St. protest (OWS). There wasn’t anything worthwhile at the Regal Union Square, and the times for the Black Panther documentary I’ve been dying to catch, The Black Power Mixtape 1967-1975, was too late, so I went instead to The Strand Bookstore, and over to the St. Marks Bookshop, to purchase a book there, since they’re in financial trouble and in need of support (I purchased Black Frankenstein).

After spending some time finding a dry spot and reading for an hour or so, I headed over to OWS and quickly found out there was a march scheduled for the Brooklyn Bridge. My usual shtick is to get into OWS and striking up a conversation with anybody. I’ve met some really interesting people this way and yesterday, it was a young lady named Charlotte (not her real name), a recent college graduate who quit her job at a Wal-Mart to join the OWS protest. I immediately liked her: she was young, intelligent, and believed passionately that she had to make a difference, and had been sleeping at OWS for the past three days. I tried to buy her dinner and offered her money, but she told me that she was being fed well and that her clothes were dry. Geeeez…

We joined the rest of the marchers and headed over to the Brooklyn Bridge en masse. Now, you probably haven’t heard about this because the police haven’t maced nor beat anyone lately, but one of the things that disturbs me the most about the OWS protest is the discrepancy between what’s actually happening here and how what little is being reported is in actuality disinformation. More on this later.

As we neared the entrance to the Bridge, I saw that the police seemed to be encouraging and even allowing marchers to cross over to the road section of the bridge. Being a veteran activist and having marched across the Brooklyn Bridge countless times, I found this odd. I have never been part of an action in which the police allowed marchers to cross over from the pedestrian section to the vehicular traffic section. In fact, when I reached the bridge, I almost followed Charlotte onto the road section and then something told me this looked like a set-up at best. So I grabbed Charlotte by the hand and pulled her to the pedestrian side, where we then watched the crowd on the road section from above.

From my perspective, it certainly looked as if the police were allowing, if not encouraging the protestors to veer off onto the road section of the bridge.

Later, a phalanx of police officers created a wall and then proceeded to make arrests, often targeting people of color who happened to be at the front of that part of the march:

What you can’t see on the second clip is that towards the back, the police had already started rolling out the mesh and corralling (“kettling”) the protestors on the road section of the bridge, so that those who had realized they would be arrested couldn’t retreat and comply by moving over to the pedestrian section of the bridge.

If you heard about this at all you probably only heard that there 700 hundred arrests. Period. No context. Or, alternatively, if you did read about this you might come upon a redacted version. For example, the Daily Kos points out that the New York Times first reported the arrests in this way:

“After allowing them onto the bridge, police cut off and arrested dozens of Occupy Wall Street protesters.”

Later it was changed to say:

“In a tense showdown over the East River, police arrested hundreds of Occupy Wall Street demonstrators after they marched onto the bridge’s Brooklyn-bound roadway.”

It must be difficult for the New York Times to suck and swallow at the same time… (click here for the full Daily Kos expose.)

Finally, this is what pissed me off the most. Here’s a clip of the police arresting a young lady who can’t be more than 12-13 years-old:

What the fuck?!! Whatever your political tendencies, we should be encouraging our youth to question, to think critically, to be civically engaged, not arresting them for having the fuckin’ huevos to speak out. This is what we’ve come to and I know some of you dumb-fuck neocon-twat motherfuckers will justify this nonsense in some way. Our youth should be ashamed of the adult population.

In other news, we continue to get more support from the unions and there is an informal commitment by Marines to come down to the protests to protect the OWS activists (click here). This Tuesday and Wednesday there will be mass protests. I expect there will be thousands and I expect that the media will continue to ignore us. Today will most likely be a day of rest for OWS.

The weather will soon be turning cold and we need sweat suits or warm clothing. If you can send sweat pants and hoods in size large (that way anyone can wear them), it would be very helpful. We have a postal box and can accept packages of any size:

Money orders only please, cannot cash checks yet. Non-perishable goods only. We can accept packages of any size. We’re currently low on food.

My name is Eddie and I’m in recovery from civilization…

Occupy Together: For information on Occupations happening near you (click here)

Mass Incarceration and Criminal Justice: From the Plantation to the Bing