Well, they say all good things and Michele Bachmann come to an end. And well, ever since Bachmann’s eerily weird “they’re all gonna laugh at you,” shtick that was supposed to pass for a State of the Union rebuttal. You just knew that her Republican presidential nomination campaign would soon come to a screeching halt after the Iowa Caucus. And in true Bachmann style and grace, she delivered the dumbest concession speech ever, as only she can. 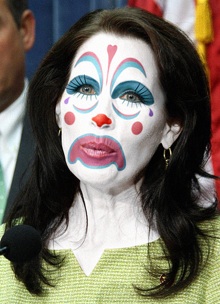