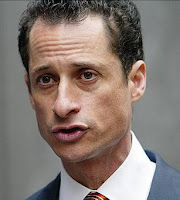 I don’t think Anthony Weiner should have resigned. OK, lemme rephrase that: I don’t think Anthony Weiner should have been forced to resign by members of his own party. Yeah, yeah, yeah, they say he was a distraction. But I’m sorry, the distraction meme wasn’t being pushed by Republicans; it was done by Democrats. And you know what I think? Calling it a distraction when you don’t even command the majority in the House to affect change is some bitchass shit. Yes, and president Obama giving the dude the kiss of death was another bitch move on the part of the White House. Not Shirley Sherrod bad, but still.

I mean, what exactly did Weiner do other than have the unfortunate pleasure of having his last name and sending pictures of his crotch to a few females online? I could be wrong, but I don’t remember Democrats calling for president Bill Clinton to step down after getting some head and leaving cum stains on a dress at the Oval office? So why play the card now? Why not leave it up to the Republican glass-house-dwellers to do the stone throwing? Why not leave it up to them to ask r suggest that he resign? No seriously, did Democrats hate him that much? What, are certain Democrats still upset about his fight for the Public Option?

Did he upset the applecart by being a bit too loud and ambitious?

So now that the distraction is gone. I suppose Democrats are now going to be able to convince Republicans to put forth a real jobs bill. Yep, now that the Weiner has pulled out, now Democrats are going to be able to get back to the job of making things right in America that they failed to do when they gad the majority before last November. I’m sorry, but I think Nancy Pelosi, president Obama, and all the other Democrats in leadership who suggested his resignation are spineless. Weiner should still be in Congress, and it should have been up to his constituents to decide whether he stays or goes much like they did for Charlie Rangel. Yes he lied, but he also apologized. The only thing he should have done differently aside from sending those pics was to change his last name before he did. To me, that was the distraction the media pounced on.

NO 40 ACRES, NO MULE, BUT WE’RE LOSING WHAT WE GOT