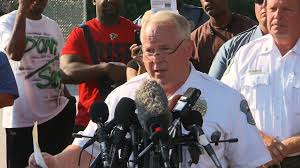 Only recently, the Ferguson Police Department released the name of the officer who shot and killed Michael Brown. The officer is six year police veteran Darren Wilson. According to CNN, prior to the shooting, Wilson had no history of disciplinary action being taken against him.  At the same time that the police released the name of the killer, they released video footage of what purportedly shows Michael Brown stealing a box of cigars from a convenience store and assaulting a store clerk. As reported on News One, the police acknowledged that the shooting of Michael Brown had absolutely nothing to do with the robbery. Such an admission exposes the true nature of the police department’s actions. The timing is not a coincidence. It is a deliberate plan. It is classic diversion and victim blaming. Now, instead of talking about the killer, Darren Wilson, the nation is focused and fixated on a store robbery. The dehumanization and niggerization process has begun. The police killed Mike’s flesh. Since Mike did not die hard enough for them, they are now trying to assassinate his character. The same thing happened to Trayvon Martin and Renisha McBride.If the police can paint Michael Brown as a thug nigger, they will taint the minds of the potential jury pool. The Ferguson police had to blot out the image of an young ambitious college bound youth and replace it with the image of a stereotypical black criminal. Such an image will not garner any sympathy for Mike. Instead, it will engender utter contempt or callous indifference. He will no longer be viewed as a victim. He will be viewed as a hooligan who deserved to die. That is the message that the police department is attempting to convey. Even if Michael Brown stole those cigars, he did not deserve to die. The officer did not stop Michael Brown to arrest him for the alleged strong arm robbery. He was stopped for walking in the street. Stealing cigars and jaywalking are not capital offenses.The robbery video serves a second purpose as well, to undermine the credibility of a key witness, Dorian Johnson. Again, the robbery had absolutely nothing to do with the interaction between Mike and Officer Darren Wilson. So, Dorian had no reason to volunteer that information during television interviews.  Equally as important, Dorian’s account has been confirmed by at least two other witnesses. I wonder what how the police plan to attack the other witnesses. As if that was not bad enough, the boot licking, butt kissing, shoe shinning, tap dancing Uncle Ruckus brigade has been deployed to attack black people and Michael Brown as well. In typical fashion, whenever black people cry out for justice, the black puppets divert the discussion into a despicable lecture about black pathology and so-called black on black violence. They whine and cry about inner city violence not receiving the same level of attention from activists and the media. First of all, inner city violence is completely irrelevant. That is a separate problem that must be addressed. It has absolutely nothing to do with legitimate demands for justice. The persistent problem of inner city violence does not justify or excuse the killing of Michael Brown, Eric Garner, Trayvon Martin, Jordan Davis and countless other victims of police brutality and white racism. It is simply ridiculous to suggest that African American cannot demand justice in such cases until all “black on black” ends. 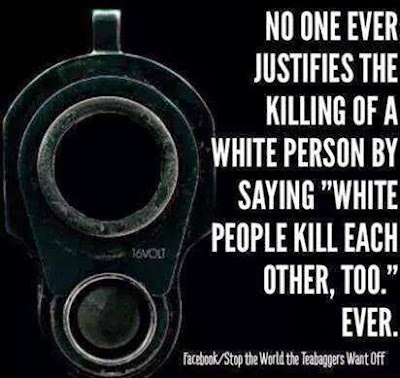 Contrary to right wing rhetoric, national and local civil rights activists have been organizing around the country for years to stop the violence. The 300 Men March movement here in Baltimore is such an example. Traditional civil rights leaders and organizations like Rev. Al Sharpton, Rev. Jesse Jackson and the NAACP have fought to stop the violence in urban communities. Unlike the Uncle Ruckus crew, those activists regularly address the root causes of the violence such as poverty, unemployment, inferior education and inadequate gun control laws. The Uncle Ruckus crew never complains about those root causes. Instead, they prefer to insult and degrade their own community.Police brutality and white vigilantism deserve of the attention. Unlike so-called inner city violence, police brutality and white vigilantism are protected and preserved by the white privilege and the police industrial complex. When the perpetrator is a white police officer and the victim is black, the perpetrators often get away with murder. When the killer is white and the victim is black, the killer is more likely to be acquitted or not even charged.  That is why we raise so much hell. That is why we march and protest.