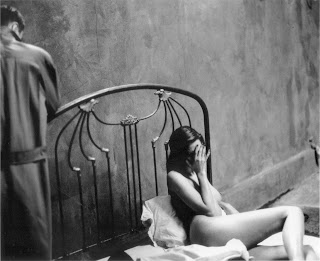 I am playing the game I suppose,
out of habits
learned long ago,
but I have been in these waters
far longer than
even my tired eyes could tell you.

Okay, so I’m going to start out by copping to the fact that I’m not all that great in the relationship arena. I don’t even have a pet… Therefore, take the rest with a grain of salt.

Something happens when I realize I’m feeling deeply for a woman and how painfully clear it is that considering a relationship is a lot like standing at the abyss and jumping. In other words, along with feelings, there comes the realization that I am also becoming vulnerable to that person I have feelings for. And that’s not a great revelation for me because, I have to admit, it’s scary.

There, I said it: relationships scare me.

It’s not a fear of commitment, that’s not it. I have and can commit to living with another person. The part that’s fearful is the part of being vulnerable. Believe me, there are plenty of people who are in committed relationships who choose not to be vulnerable. It’s not that hard. You can be in a long-term, committed relationship and not really share deep intimacy. I see it all the time. But because of the kind of person I am, when I open and give, it’s about going…

That’s why I’ve previously admitted that beginnings are extremely difficult at times with yours truly. If I’m seeing you and we both know there’s a surrender looming in the near future — we’re both feeling these feelings and we know it’s headed somewhere — then I’m not holding much of anything back. I’m not saying that I’m blabbing everything out by the third date, or that I immediately go overboard. LOL! That’s closer to codependency, not love. I am saying that I work at being transparent. I don’t play hide and seek. If I’m feeling something, I will look you in the eyes and let you know, “Sweetie, I don’t know how or why, but I’m starting to have these feelings… ” I won’t play The Game. The one thing you can always count on with me, is that you will always know where I stand (sometimes this is not such a good thing).

Sometimes I think that I’m too transparent or honest for my own good, but that’s how I roll: I put my cards on the table and lay it out as I see and feel it. I believe there are many people out there who see my stance as too idealistic. That people really can’t be totally open to one another. Worse, there are others who will use that. Those who would manipulate my transparency don’t last, because, shit, I’ve been veteran of the Love Wars for longer than even my tired eyes could tell you. I’m not going to let you use me that way. I’d rather go home, curl up in a fetal position, and ride that hurt — that energy — until I’m done with it.

Still, there’s a lot of anxiety around opening up to another in that way. Sometimes what helps me are basic reassurances. I’m like a kid in more ways than one. Something simple such as a “hello” or a passing show of affection goes a long way with me. It’s ironic because those things can be easily faked to some degree, but if I’m getting the attention and shows of affection, I’m not as anxious. Some women don’t like men like that, but it’s who I am. A kiss, a note, a surprise fuck, even just an unbidden and tender smile soothes me and lets me know that, though there aren’t any guarantees in life, you’re there and you’re somehow saying that we’re moving forward — that you’re there with me, feeling me.

In other words, I need tons of affection! LOL!

You see, I’m really not all that complicated. If we were together, all it would take is that you throw some food at me, pay lots of attention and some sex here and there, and I’m straight.

I’m kidding. I guess what I’m saying is that relationships aren’t easy and when I resolve to engage in a relationship, I don’t take that lightly. Dearest, relationships, despite what you have been told, aren’t games. I’m also saying that a couple needs to reassure one another, especially in the beginning, when things are not so clear. Sometimes what makes the difference between having Mr./ Ms. Right as opposed to Mr./ Ms. Right (now), is how you open up to that person.