Home Entertainment Hey,TMZ: We Are Not Niggers

During a TMZ interview, hip hop mogul and ex felon Suge Knight said that he prefers the word “nigga” over the term “African American”. He further said, “We ain’t from Africa.” No one expects a thug and criminal like Suge Knight to drop any gems of wisdom. After all, we are talking about a man who got rich promoting, producing and selling so-called gangsta rap. That music constantly refers to black people as niggas, bitches, hoes, etc.  It celebrates murder, drug dealing, misogyny, pimping, stripping, etc. So again, I do not expect to hear enlightening words from Mr. Knight.

However, I do expect more TMZ, much more. As reported on the Huffington Post, TMZ had the audacity to create a poll asking their readers if black people should be referred to as African Americans or niggas. 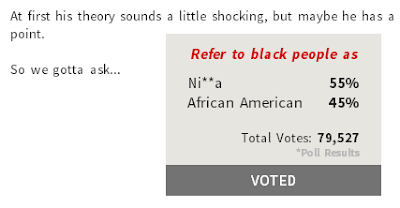 Where is our outrage? While the world is up in arms about a backwoods, red neck reality star for expressing his religious views, we do not hear a peep from those same people about TMZ’s racist poll. Where are the letters or petitions to TMZ condemning TMZ’s poll?  Where are the demands for an apology to the African American community?

TMZ, we are not niggers. We are African Americans. As Malcolm X said, we did not come to America on the Mayflower. Our ancestors were kidnapped from the motherland, Africa and dragged to America. We were stripped of our humanity and reduced to chattel property. We came to this country in shackles packed in slave ships like sardines. We were forced to wallow in our waste for long periods of time. When we finally arrived in America, we were beaten, raped, burned, shot, lynched, castrated and butchered.

Not only were we physically oppressed, we were mentally oppressed. Over time, our enemy tried to blot out our original African culture, identity and history. However, our African identity did not die. It evolved, adapted, survived and became African American. Africa is in our blood, physical features, food, music, dance, worship and superstitions. Despite our oppression, we managed to salvage fragments of our cultural identity.

Not only did our oppressor try to destroy our culture, our oppressor indoctrinated us with the myth of white supremacy. To further degrade and denigrate us, our oppressor created and used the most offensive word in the English language, nigger. For centuries, the slave masters and segregationists called us niggers and fed us a diet of self hatred. Eventually, many of us internalized our oppression and began to adopt the racist language of the oppressor. Sadly, we began to call ourselves niggers. Instead of fighting that ugly legacy, TMZ has decided to perpetuate it.

We should be outraged, but we are not.  We would rather jump on another group’s bandwagon.

Debbie Riddle Says: No Hiring Mexicans… Unless it is to cook,...