Home Uncategorized State of Michigan Orders Closing of Half of Detroit Schools, 60 Kids... 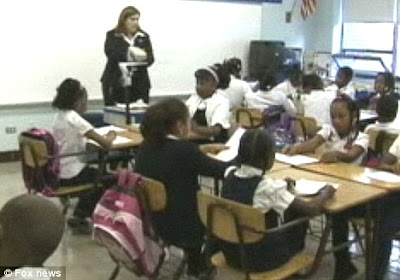 I’ve always said that the city of Detroit was a microcosm of the state of Black America. They say that when America catches a cold, Black America comes down with pneumonia. Detroit on the other hand, comes down with the bubonic plague. And just when a Detroit native who happens to be a white rapper gives Detroiters such as my wife hope with a Chrysler Super Bowl commercial, comes the devastating news of school closings:
The Detroit Public Schools system plans to close half of its schools, leaving classrooms bursting at the seams with 60 students each.

[…] The problems have been a long time coming. Over the past 10 years, Detroit’s public school enrollment has fallen by 50 percent as parents continue to pull their kids out and send them to suburban schools, meaning less funding for the city schools.

Bobb says he knows this new plan isn’t economically or academically viable, and he’s hoping for a complete restructuring of the school system. (source)So while everyone is focused on the fight in Wisconsin, the crisis in Detroit is being overlooked or passed over as typical problem of Negro dysfunction like this. Mind you, this is also occurring at a time when all three Detroit automakers show gains in sales for the month of February; a welcomed sign, I’m sure. However, with the daunting task of filling the $327 million budget gap, from the looks of it.teachers and children are going to take a major hit. Especially the children forced into those sixty students per classroom settings, as proposed and projected by Robert Bobb, the emergency financial manager:


For the past few weeks we’ve seen Wisconsin as the center of the fight against a governor who has provided tax breaks to wealthy corporations in his state, manufacture a faux deficit, and who is now asking public employees to foot the bill, and kill collective bargaining. The country is currently in an uproar over this, and currently, there are major protests all across the country in solidarity for the people of Madison. With that being said, I can’t help but wonder where is the outrage or concern over what’s happening in Detroit?

With all this talk about “winning the future” as of late, I can only hope the future has room for the children of the Detroit public school system. Because from where I’m sitting, these proposed school closings, though meant to curtail a budget deficit. Will surely open wider cracks in the system making it easier children in Detroit to fall through. But hey, maybe winning the future includes more funding for federal prisons as proposed by the White House. If so, that ought to make a lot of us in and outside of Detroit safer, no?

Sen. Elizabeth Warren on Federal Minimum Wage at $22 an Hour