I think that one of my proudest moments in life happened at the beginning of this year: my younger brother – a heterosexual Black adult male – joined me in the fight against Amendment One by taking a photo with me, donning “Vote Against” t-shirts. For about a year, I’ve worked tirelessly against the passing of North Carolina’s Amendment One. Misleadingly named the “Anti-Gay Marriage Amendment”, the amendment appears as innocent to some, in that it seeks to define marriage. However, where the government (and honestly, most citizens therein) fail is in acknowledging that most citizens don’t know how to (or may not care to0 read the underlying language in proposed legislation, nor are they formally trained to interpret the law. As a result, citizens suffer.

The language on the ballot that NC citizens voted either ‘FOR’ or ‘AGAINST’ on May 8th, or earlier, stated:

Constitutional amendment to provide that marriage between one man and one woman is the only domestic legal union that shall be valid or recognized in this State.

It is important to note that prior to May 8, 2012, thirty states have included “same-sex marriage” bans in their constitutions. Legal scholars note that there are three types of language that these marriage bans maintain, and the rarest (and most broad) are language types such that Ohio used. North Carolina has now adopted such similar language, even though the consequences were proven in Ohio and the people of Ohio worked hard (and are still working) toward better legislation.

I am of the opinion that the amendment was framed this way before and during the vote in order to appeal to the emotions of the religious voters of the South. In fact, the people who thought it was about marriage and gays came out and expressed how much bigotry and privilege they maintained, quietly or not. However, the idea of marriage is less the focus in the language of the newly passed amendment, and the phrase the only domestic legal union is. Why? Because the courts have to interpret exactly what that means. Additionally, the newly passed “marriage amendment” is nearly identical to a tragedy that passed in Ohio, that opened the floodgates to consequences for more than just persons of the same sex/gender seeking marriage. In fact, in both Ohio and North Carolina, same sex marriage is already outlawed without the amendments.

Beyond further marginalizing the LGBTQ community, the marriage amendment has the potential to affect domestic violence victims. In Ohio, defense attorneys argued that unwed heterosexual couples did not meet the criteria for a “union”, however the court may decide to define it, and as such does not qualify for certain charges. Defense attorneys were also successful in overturning domestic violence convictions on this basis, and the courts were unclear on whether or not certain protections could be afforded to victims in the form of restraining orders. Also, the courts ruled inconsistently on these matters across the state, and so victims in different regions were not afforded the same protections. Eventually, the Ohio Supreme Court ruled that the constitutional ban did not affect domestic violence laws; however, it took three years for the circumstances to reach the court and for a decision to be made. During those three years, damage was done.

Even more unfortunate is the language in North Carolina’s newly passed amendment is more vague, and potentially more dangerous, than that belonging to Ohio. While there are some extremely progressive parts of North Carolina, there are also very small, rural communities that may have different understandings of the phrase “legal domestic union” and, much like Ohio, provide unequal protection of the law. This matters. THIS MATTERS. This matters because people in rural communities may not have access to many of the resources in the larger cities, and it Amendment One is an issue of classism in addition to anti-gay, religious bigotry.

Along those same lines, Amendment One has a great potential affect legislation where children of unwed parents are concerned. Custody and visitation laws may be affected with parties who have never had a “legal domestic union” as the courts see fit to interpret. Additionally, insurance benefits provided by either parent therein have the potential to be affected. This is incredibly important because, as of 2010, 72% of Black mothers were unwed. Does this mean that in every instance, the father is absent? Absolutely not. In one way or another, either through the courts or voluntarily, I would suggest that it has been my experience that many fathers are around in some form. I do not have a statistic and I will not speculate on a statistic; I am saying this to say that the passing of this amendment and a courts subsequent decision could limit this involvement, ergo harming children and Black families. Amendment One is harmful because, in addition to the anti-gay, religious bigotry and classism, it has the potential to be racially discriminatory and harmful. It harms single-parent families which, by extension, harms the Black community greatly.

Also, it should be noted that in few counties in North Carolina, unwed heterosexual couples are allowed domestic civil unions; this provides that partners can be on one another’s insurance benefits in addition to other benefits. These include assisting with medical decisions, adoptions, will and trusts, and other financial decisions. However, since marriage between one man and one woman is now the only domestic legal union, many people will be at a disadvantage.

We do not know what will happen. I think that is important to say; however, we do know the things that have the potential to happen. Also, the fact that marriage between one man and one woman is the only form of marriage acceptable in the state of North Carolina (and the other states who have amendments) is illustrative of the fact that the governments are using emotional push-buttons in order to further underlying agendas. Moreover, Constitutional Amendments aren’t like trying on new shoes and deciding that we do not like the fit. It takes time, energy, and resources to ‘undo’ this; there is no easy fix. Once this gets out of hand and negatively affects the citizens of North Carolina, the legislature cannot simply pass a statute to remedy it; a new amendment has to be passed and this will be extremely difficult.

Again, as someone from North Carolina who has been on the ground working for just about a year against the passing of this very scary amendment, I’m torn between sadness, disgust, and rage. While not entirely surprised that the amendment passed, I did think that it would be closer; only seven of North Carolina’s 100 counties voted successfully against it. A few weeks before the election, I got a 21-year-old brother registered to vote because he specifically wanted to vote against the amendment. The day of actual vote, I got into many arguments with many religious Black people who felt as though voting for Amendment One was a testament to their religious convictions. Though I attempted to explain, I was devastated at how unchanged their minds were; and they were mostly in their twenties! 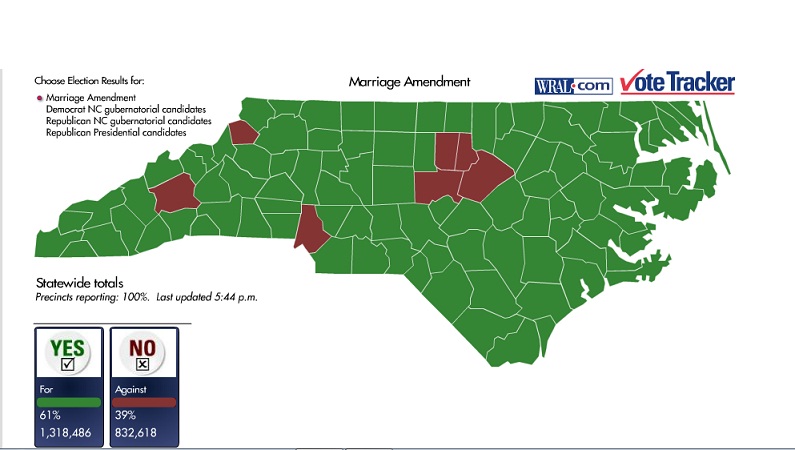 I challenged all of my Facebook friends to give me a reason to vote FOR Amendment One that had nothing to do with religion and I got no responses. However, I went to high school with a guy who is apparently becoming a minister, and very much disagreed with my stance on the amendment. He, as a minister, has a child out of wedlock and maybe might just be a Black Republican (I’m not quite sure of the latter). And so, to appeal to his religious nature, I introduced him to Loving v. Virginia, where a married Black woman and white man were sentenced to a year in prison (suspended for 25 years of probation) for their interracial marriage in 1959 because the court found that:

Almighty God created the races white, black, yellow, malay and red, and he placed them on separate continents. And but for the interference with his arrangement there would be no cause for such marriages. The fact that he separated the races shows that he did not intend for the races to mix.

Our government and constitutions should not be used as a sword, and it should not be used to prevent people from equal protection, rights, or benefits under the law. Our constitution is meant to give freedoms and not take them away. While in a way they’ve already begun, they are definitely coming for women and people of color next. Keep your religious opinions away from my constitution.