I don’t know if it’s just me, but Kanye West’s song brings up memories of me dating black men who never stopped dating their mothers, and really never removed themselves off of the tit. I think I’m going to throw up as these flashes of men who had these bizarre pseudo-sexual, intimate relationships. This song is honestly raw and disturbing as it shows that Kanye is still a young boy trying to navigate his affections for his mother and his mother’s affections for another male.

I never thought that a man calling his mother every night and regulating her evening activities was healthy. And real talk, I got a cousin who said his mother can never have a boyfriend. He’s married with children and lives miles away, while she is alone and going through major health complications. So she’s been dickless for about the last 15 years. 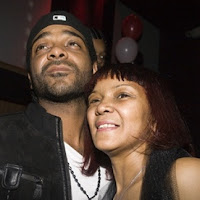 Interestingly, in time for father’s day, I would like to thank all the men who planted seeds and left little black boys to create a manhood that was wrapped around their mother’s frustrations from absentee father’s and complicated dating life. And I want to congratulate all the mother’s who kept their children from their father’s as a tactic of vengeance due to a funky relationship with their baby’s father.

All of you’s who were raised by women, this is not a stab. Black women have raised millions of beautiful children. But I’m not going to front, some of my friends biggest pains are men who simply cannot let go of their mother’s to develop an intimate relationship.

BTW, single mothers, your son is not your n*gga, and never will be. He is not the man of the house, and please let him be a child. But I forewarn you, don’t take him anywhere near Eddie Long’s church or Longfellow program.

Mama Jones Is The HBIC: “In this bonus clip from Episode 7 of Love & Hip Hop, Mama Jones is furious with curious for not giving her a heads up about the proposal!”