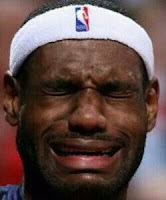 I gotta admit, this year, the NBA playoffs and finals have completely rejuvenated my love for professional basketball. I can’t remember when or how that love left me, but suffice it to say, it’s back. As you know, the Dallas Mavericks beat the Miami Heat last night to win this years, and it’s first ever championship. Disappointing for the Heat and their famdiom which suddenly were made up of dick-riders galore. But not the same for the Mavs whose new motto should be: who needs “The Big #” when all you need is great defensive teamwork and “The Big 1” who happens to be an imported white dude..

After the game, I couldn’t wait to listen to the post game press conference featuring none other than larger than life superstar, LeBron James, and his partner in crime Dwayne Wade. But with LeBron taking a lot of heat from fans and critics alike, I was more interested in hearing what he had to say. In a previous game in the series, I couldn’t help but to notice that LeBron failed to hold himself accountable for his poor performances particularly in the fourth quarter. So having lost yet another trip to the NBA championship when projected as the hands-down favorite to win.

Surely King James being the stand up guy he is, he’d own his shit.

At least this is what I thought until he was asked how he felt about his haters. He admitted that he was indeed hurt and for it seemed like a “personal failure,” but he also said, “I’m not going to hang my head low.” Nothing wrong with that; it’s what you’d expect him to say. But it was the following that threw me for a loop when LeBron said that he wouldn’t let it bother him that so many people wanted to see him fail:

‎“Absolutely not, because at the end of the day, all the people that were rooting on me to fail, at the end of the day, they have to wake up tomorrow and have the same life that they had before they woke up today… They have the same personal problems they had today. I’m going to continue to live the way I want to live and continue to do the things that I want to do with me and my family and be happy with that.” — LeBron James

Now this bothered me, and I don’t know if anyone caught it. But LeBron pretty much said that he doesn’t care what his “haters” may say because at the end of the day they’re broke and unhappy, while he’s pretty wealthy and able to do things with his family that they’re not. Again, I could be wrong but that’s what I took away from that. And you know what? Though a true statement – yes, he’s richer than the average hater – I thought it to be quite arrogant and in poor taste. He might as well have said, “So what I didn’t win? I don’t care about winning a championship; shit, as long as I have money, unlike you peasants, I’m good.” Sorry pal, you’ll never be on of the great ones with that attitude. Actually, sounds like words from a loser to be honest. But then again, this came from a guy who has yet to take any responsibility publicly for his not-so-stellar play in the NBA finals. And please believe, NBA fans and basketball pundits alike will never forget, nor allow him to forget his douchebag moment in time, on the games highest stage. But no, even in a loss with your ego crushed you couldn’t be humble. You couldn’t, and you know why? Because you sir, are a loser. Truth is, you’re a little boy playing a grown man’s game.

And then he also said that God told him it wasn’t his time to win a championship, or some shit like that. Really, LeBron? I know when faced with a setback we tend to come up with various ways of rationalizing why things happen the way they do. But to say that or suggest that it wasn’t his time because God said so would actually mean that part of God’s plan involved LeBron disappearing in the fourth quarter and or scoring just eight points in game four. What, did God have some money on the Dallas Mavericks?

If so, wouldn’t that make LeBron the biggest points shaver in history?

The jokes on you LeBron. God may have told you it wasn’t your time. But I think that’s because he had money riding on the Mavs. Don’t worry, God is no hater; he gave you the talents you took to South Beach. Unfortunately for you, he didn’t give you class or that fourth quarter killer instinct. But you’re still a young guy, and barring injuries, maybe you’ll get there one day.

ITS THE MAN WE ALL KNOW AND LOVE